This is an excerpt of a copy of a letter written by Hazel Ladson to her mother on 12 March 1990.

“Last Friday was the town’s big photography day – A Day in the Life of Deniliquin. As well as doing parks and gardens, I got a second assignment of McAtamney’s dental surgery. I saw Ian earlier in the week and he said he wasn’t working that day but that he was sure to have an emergency.

I began the day at 6am sunrise and drove all over town looking for early morning walkers. Not a lot of people around but gosh the town is beautiful at that time. Did find a few walkers and people going to work. Had breakfast from 8 to 9am then went to the park at the North Deni junction where the Garden Club were doing some gardening. 10am went home and took kids to Shirley’s (Neville was having a flex day that day to study but also looked after the boys at odd times). Went to Waring Gardens, nothing doing there so went to the office to do some photocopying.

11:45 tried to photograph Ian McAtamney at work on his houseboat but couldn’t find him. Had lunch then went back to main park and photographed people having lunch there. Went to Deniliquin Jewellers and got Barry at work in the back on some jewellery and his girls doing some engraving. 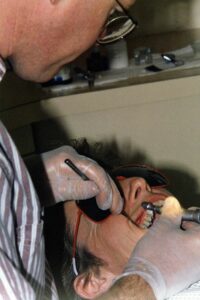 At 1:30 I went to the RSL park where the kids from Gulpa Preschool go each day. 2pm collected the boys and took them home. 2:30 met Ian and Anne at the surgery. However they had no patients so they set up a mock scene with Anne in the chair wearing dark glasses. 3pm photographed inside SSW supermarket. 3:30 home for afternoon tea. 4pm took boys to McFaull Park to feed the ducks and photograph them, then to Townsend Park to play in the playground. Drove around for a while then found cricket practice at Memorial Park. 6pm bought fish and chips, took boys home, had quick tea then went to the basketball to get some more photos before the light got too low. There was girls’ outdoor basketball and boys’ indoor basketball all at the football grounds where they also happened to be holding a game of night football so got a lot there including the ice cream man. Got permission to photograph a bit more basketball using flash and also the crowd so felt pretty pleased with all that. Got home at 8:30 with a few more photos to fill the film so took Neville relaxing with the cat and the boys asleep in bed.

Overall I took 106 photos and was thoroughly exhausted. I was sorry to miss Ian at work on the houseboat and I also could have got the Little Athletics but didn’t find out about them until they were due to finish. Apart from petrol I used that day it was not expensive. We had to buy the film but at a very cheap rate. The processing is done by the committee organizing the project and they should recoup that cost from the exhibition they plan to put on from Easter Saturday for a week. Only good photos will be enlarged and displayed but all photos will be put into albums and all are available for ordering reprints and the photographer will get 50% of the sales of reprints. There were 45 photographers out on Friday covering as much of Deniliquin as we could for a 24 hour period. I am really looking forward to the exhibition to see just what does go on in the town over a day. The original plan was to publish a book from it but they were unsuccessful in getting an Arts Council grant so that may not come off.” 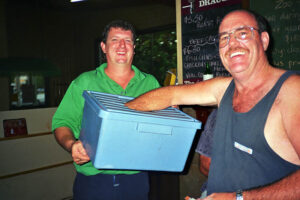 Judy Bond. Participant in 1990, 2001 & 2011
I so enjoyed taking part in the three projects which have recorded everyday living in Deniliquin.

It was an opportunity to record the humdrum, unique and quirky sides of living here, which are often taken for granted.

Would institutions & situations from ten and twenty years ago still be in existence? Perhaps they may have totally changed or been eliminated.

A Day in the Life of Deniliquin 2011 was even more special with funding obtained by the organisers. This provided the opportunity to hold organised information sessions and photography workshops which were very enjoyable. Also we will be able to view the results from the previous projects held in 1991 and 2001. 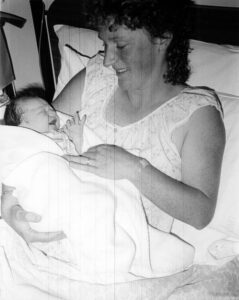 In February 2011, the images from ‘1991’ and 2001 were exhibited at the Peppin Heritage Centre during the ‘Back to Deni’ celebrations. As we had so little information about the early photos, we asked visitors to the exhibition to identify people and locations. Of particular interest was the photo of the mother and baby who had been born on 9th March. We knew the baby would be about to turn 20 and wanted to re-photograph him or her on the 9th March 2011.

A visitor identified the mum as Veronica Taylor’s daughter Marlene. We had also posted some of the photos on the A Day in the Life of Deniliquin Facebook page and, not long after, the daughter of Marlene Taylor, was referred to the page and, after looking at the photo and the date that (we thought) the photo had been taken, said it couldn’t be her.

We were back to square one and so, in the week leading up to the 9th March 2011, we asked the local newspaper, the Pastoral Times, to publish the photo with a request for information. The next day, we got a call from Veronica Taylor saying it was definitely her daughter Marlene and granddaughter Sarah. Our relief evaporated when Veronica mentioned that she was about to visit Marlene and Sarah for Sarah’s 21st birthday on the 9th March. But that would mean….

Realisation dawned that perhaps we had it wrong and a flurry of slightly frantic phone calls to some of the original organisers and checking of dates made it clear that the original photos actually had all been taken on 9th March 1990. The clincher was realising that the 9th March 1991 was a Saturday and several of the photos show Council workers at work, much more likely to have happened on Friday 9th March 1990.

We are still unsure whether the second A Day in the Life of Deniliquin was supposed to happen in 2000 or that those involved had genuinely forgotten. Regardless, the small anomaly of the dates has provided us with a great story that illustrates the many connections within a community and the power of the media.